Flames and black smoke billow from the front end of this Piper PA-32 after it crash landed at the West Jordan Soccer Complex on Aug. 10. Rescuers saved the lives of the three individuals on board, pulling them free from the wreckage before the plane was fully engulfed. Photo courtesy of WJPD

They say heroes aren’t born, they’re made.
In the moments of split decision, when a family’s only hope for survival depends upon the quick-thinking and selfless actions of complete strangers, that’s where true heroes can be found. 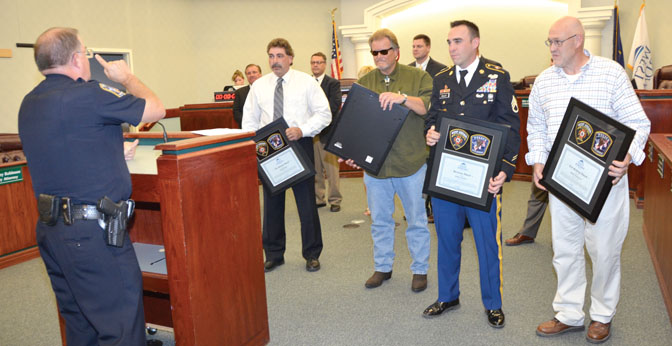 On Sept. 22, West Jordan emergency responders honored five such heroes for saving the lives of Steven and Kathy Sedlacek and their daughter, Anna Looper, of Boise, Idaho. It was an emotional evening as Police Chief Doug Diamond recounted the rescue efforts that ensued after the family’s Piper PA-32 airplane crashed into a field at the West Jordan Soccer Complex, 7930 South 4000 West, on Aug. 10, shortly after taking off from the South Valley Regional Airport.
Grateful to be alive, Steven and Kathy Sedlacek stood among the audience at the West Jordan City Council meeting to greet and honor their rescuers. Anna Looper remained at home with her husband in Idaho.
“It was good to be here and walk around. The last time they saw me I was flat on my back,” Steven Sedlacek said. “It’s good to be far enough progressed where I can walk around and give them a hug and thank them. They deserve all that praise.”
Kelly Busenbark, Kirby Crump, Staff Sgt. Robert Kelley, David Lawrence and Michael Spor saw the Sedlaceks’ plane go down and immediately raced to render aid to the crash victims. For their acts of selfless service, Kelley, Crump and Lawrence received Heroism Awards and Spor and Busenbark were presented with Life Saving Awards.
“I saw the plane take off. I noticed it was at a 10-degree angle, and it wasn’t gaining any lift. With aviation experience, I knew something was wrong,” Kelley said. “When he banked left, I saw his landing gear come out. I knew the plane was going down.” 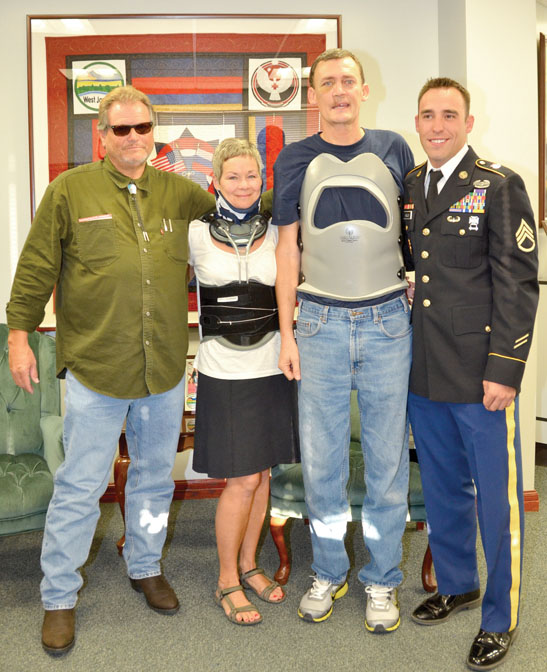 Kirby Crump, Kathy and Steven Sedlacek and Staff Sgt. Robert Kelly are reunited during an award presentation that honored five men for their heroic efforts to save the lives of the Sedlaceks and their daughter, Anna Looper, after their small airplane crashed at the West Jordan Soccer Complex.
Busenbark and Crump made the same determination. After checking for oncoming traffic, all three men ran red lights at different intersections and sped toward the downed aircraft.
Steven Sedlacek said he doesn’t remember anything about the accident, but a preliminary report from the National Transportation Safety Board states that, as the plane’s pilot, he sent a radio transmission during their ascent indicating several times that there was an emergency. He never specified the nature of the crisis.
As the plane was going down, witnesses reported that it hit a light post before crash landing at the soccer complex.
Kelley dialed 911 while navigating toward the spot where he thought the plane would be.
He and Crump were the first to arrive on scene. They jumped the curb and drove across the field until they reached the plane wreckage. Busenbark wasn’t far behind.
“I first saw the smoke and then the airplane,” Crump said.
Lawrence and Spor were already in the park and raced across the fields on foot to reach the aircraft and its occupants.
“Everyone could see flames around the engine at the front and knew it wouldn’t be long before the plane was engulfed in flames,” Diamond said.
Crump and Kelley jumped onto the plane’s wing and opened the door to find a severely injured Kathy Sedlacek in the front passenger seat and Looper standing in the back of the plane. Steven Sedlacek was critically injured and unconscious in the pilot’s seat.
Kelley introduced himself to the family before unstrapping Kathy Sedlacek and removing her from the burning plane. Together, Spor and Kelley moved her to safety. Spor remained with the injured woman until his return.
“My initial thought was to get Steve out because he was the worst of all three. He was also nearest the fire. But there was no door on the left [pilot] side. There was a back passenger door, though,” Kelley said.
While Crump struggled to free the pilot, Lawrence and Kelley rescued Looper through the plane’s rear left door.
“[David Lawrence] drew on his experience as an EMT and assessed Anna’s condition, reassuring Robert [Kelley] that she would be taken care of so that he could go back to help get the pilot,” Diamond said.
Kelley returned to the burning plane a third time.
He found Crump still fighting to save Steven Sedlacek.
With the flames continuing to spread, Crump steadfastly continued to search for a way to free the pilot, determined he wouldn’t be left behind.
“I removed his shoulder belt, but I couldn’t see his lap belt,” he said.
Flames now reaching over the dashboard, Crump knew time was running out when he noticed Sedlacek’s hand reaching toward his left side. He zeroed in on that spot and found the release for the belt, he said.
“He pulled and pulled and pulled, each time giving what he thought was his last full measure,” Diamond reported. “Miraculously, Steven finally came loose so Robert [Kelley] and Kirby [Crump] could pull him out of the plane where David [Lawrence] and Kelly [Busenbark] were once again waiting to get them safely away from the burning plane.” 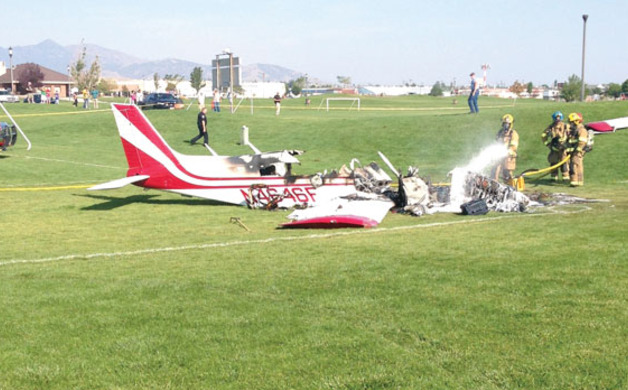 Steven Sedlacek was taken by medical helicopter to the Intermountain Medical Center in critical condition. All three passengers suffered back and other injuries in the crash. They’re expected to make a full recovery.
“It’s the average day-to-day guy who steps up in an important occasion like this, putting their own life in danger, that makes the difference,” Diamond said.
News