A sense of identity; that’s what officials say the redevelopment of roughly 17 acres of property east of the City Hall municipal campus will bring to West Jordan.
By 2017, possibly sooner, city leaders expect to see phase one of the project coming to life. Initial plans include a hotel, convention center, first-class office space, shopping, dining and a central plaza. A proposed sky bridge will connect the municipal campus to the city center across Redwood Road.
“We’re excited for the opportunity to revitalize this area of the city to create more of a downtown look and feel for West Jordan,” Interim City Manager Bryce Haderlie said.
It’s a dream that began in 2003 with the creation of an urban redevelopment area, a special taxing district, on the east side of Redwood Road between 7800 South and about 8200 South. The URA allows the city to utilize taxes generated by the redevelopment above a base amount to help pay for the project.
“The city spent a considerable amount of money to do a plan back then, but it never materialized,” Mayor Kim Rolfe said.
City officials say the timing wasn’t right.
“The market wasn’t ready in 2003 for this development. It just didn’t respond,” Community Development Director Tom Burdett added.
In 2007, the recession hit, effectively ending the initial push for a revitalized downtown district.
Rolfe was a member of the city council at the time the URA was approved. He said he’s excited to be part of the council that will finally see this project come out of the ground.
“Now the market is coming back. Jordan Landing is built out, 9000 South and 7000 South along Redwood have reached their capacities. There’s more of an interest in the marketplace to redevelop this land,” Burdett said. 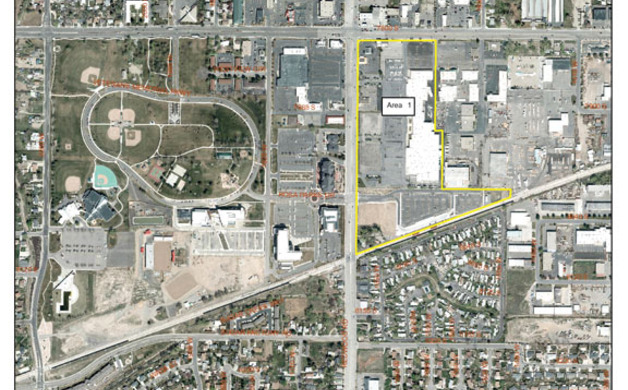 The Jordan School District owns the majority of the property marked for redevelopment. Acquisition of the land and structures could come in the form of a property swap. In this case, developers and the city will partner to construct a new auxiliary services building for the district on a different site in exchange for the property on Redwood Road owned by the district.
“The developer is working hand in glove with us to relocate the school district. Because they’re in the construction business, they could actually help build the new building for the district,” Burdett said.
A memorandum of understanding between the city, developers and school district is guiding the process. Burdett said the three entities are working as partners to find a scenario that will be mutually beneficial for all parties.
The city is proposing to move the school district to a location near its main offices in Jordan Landing. At least five properties are currently under consideration. One is owned by the city, while the remainder are privately held.
“We think there’s probably a site and a building configuration that can more effectively support their purposes,” Burdett said.
The move is a win-win for the school district and the city, he said.
Haderlie said that the city’s goal is to form an interlocal agreement with the district and plan the relocation in such a way that it isn’t overburdening the district with the cost of the transition. A portion of the tax increment dollars raised by the redevelopment could be used to help fund the move, he explained.
In September, the city council selected Arbor Land Development and Gardner Company, two development firms, as the preferred developers for this project.
“They seem to be dedicated to coming up with a master plan in concert with the city,” Burdett said. “They bring the risk capital to the redevelopment area and their knowledge of the real estate market. That’s why we’re working with them.”
To date, the developers have helped design the potential layout for the site and are working closely with the city on negotiations with the school district.
As the project gains traction, the city will likely sign an official contract, or Agreement to Develop Land, with the two firms, Burdett said.
With a TRAX station and UTA park and ride lot already in place on the property, Burdett said the area is ideal for the construction of a housing element to accommodate the rising generation of millennials who choose to “rent on purpose” as a lifestyle choice.
News, Local Life, Business