Copper Hills students, faculty and sports teams have banded together to support senior soccer player Mia Poulson who was hospitalized in critical condition after a serious car accident Sept. 10.
“Soon after the accident, I tweeted out for our students to meet on the football field. It was a somber time, but the students supported her with prayers and thoughts. Some of the best things that have come from all of this have not just come from our school. Donations, cards and best wishes have come from all over the place. These kids are good,” Copper Hills Principal Todd Quarnberg said.
The Grizzlies soccer team voted to continue their game the next day as scheduled. The players wore red ribbons, Poulsen’s favorite color, in support of their teammate. Other sports teams from the school adopted the color red, taping hockey sticks, ankles and wearing ribbons in their hair. 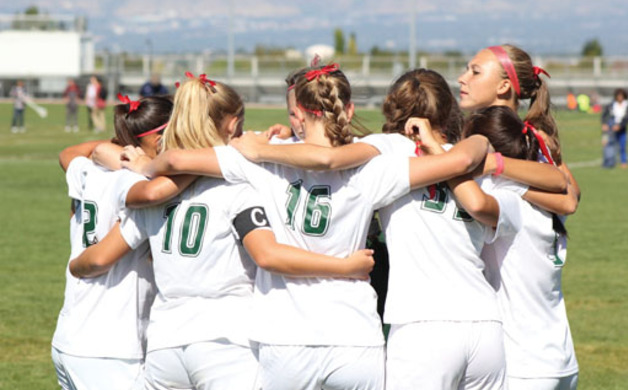 Poulsen is an accomplished soccer player at Copper Hills and has spent several years playing on club teams across the valley. Her friends and teammates across the state have played in support of her.
Poulsen’s condition has improved and she is now in stable condition, but she is still in the hospital. She has a long recovery ahead of her, but in the meantime, her coaches, teammates and friends are visiting her and others have sent best wishes.
Teams used Twitter to share their thoughts and photos in support of their fallen teammate. Her friends started the Twitter hashtag #prayformia, and it was flooded with updates and photos from schools around the state and as far away as Hawaii.
“After the accident, she was voted as our homecoming queen. Of course, she is not here, but when her name was called, the students stood and cheered in respect. The senior football captains took her sash and tiara and walked in her place,” Quarnberg said.
Sports